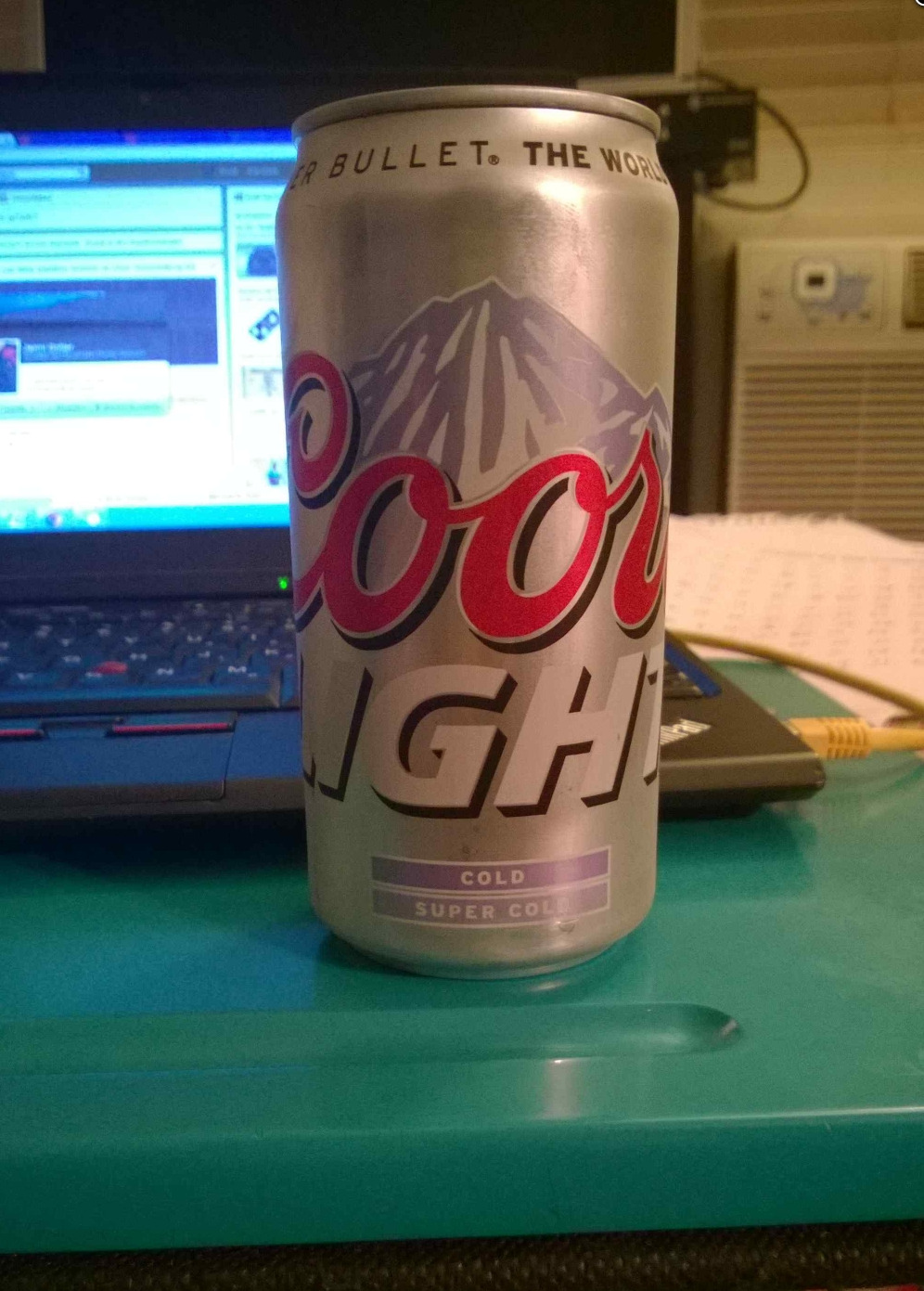 Color Change Technology
This is most common in the Coors family of products. Their labels on their aluminum bottles, cans and glass bottles feature those tell tale mountains and bands that let you know your Coors Light is as cold as the Rockies.  This particular piece of 'tech' cracks me up because it give you nothing you couldn't just get by touching the bottle or can. You can tell from the external temperature if the internal liquid is at appropriate drinking temperature. This serves no benefit, it's pure gimmick. I love it.

Rifling
There was a moment in time where Miller included rifling on their glass bottle necks. This was meant to create a 'flavor vortex.' The marketing made it seem that the rifling would cause the liquid to swirl at higher velocity increasing your volume per second consumption while drinking. I assume that this was actually to shoot the flavorless concoction down your gullet with maximum velocity, protecting your taste buds from the ''''beer.'''' A noble effort. I doubt it helped very much.

Vents
I think vents are hilarious. Coors had a campaign where they added 'vents' to the mouths of their cans. The idea is that when more air can get in the can, the beer doesn't 'glug' and you instead get a smooth pour, presumably for chugging. That's all the vents did. They let air in while you were drinking to make it easier to drink faster.

Punch Hole Perforations
The punch hole perforations were a piece of beer tech also by the geniuses at Miller. These were small perforated U shaped indentations on the top of the can. The idea was that you would use a key to punch open this indentation allowing air into the can while you drink. Very similar to the vents, but a call back to older can designs of  yore, before even pull tabs. You may have done something similar with a can of tomato juice. Punch two holes in the top of the can and the pour will be smooth, rather than oscillating between full blast and virtually nothing coming out. I just like the idea that the consumer could use some help identifying where that hole should go, and Miller, generous as always, giving you a guiding outline.

Flavor Seal Liner
Virtually all modern aluminum cans contain a liner that prevents metal from leaching into the contents of the can. This can be seen anywhere from Campbell's Soup to a can of Pepsi. This technology has been around for decades, but the bright minds at the macro brewers have never let that get in the way of a marketing gimmick. Thus was born the flavor seal liner. This layer of protective coating is advertized as 'sealing in the flavor' of the beer. In the case of Coors Light they even made the liner blue so that you really know it's there.

Nitrogen Canisters
Nitro canisters are most easily seen in cans and bottles of Guinness, where they are explicitly called 'widgets'. When poured from a tap, a nitrogen gas mixture is added to the beer, rather than the pure carbon dioxide that carbonates most beers. This results in a beer that is 'smoother' and has less 'bite.' It is why Gunniess has a creamier and less bubbly flavor and mouthfeel. In order to recreate that experience at home, Guiness (and many other brewers that make 'nitro' beers in cans and bottle, a trend that has mostly fallen out of fashion.) includes a small nitrogen canister, similar to what you would use to make whipped cream. These canisters are meant to recreate the 'head' of the beer when poured into a glass. When the can or bottle is opened, the pressure change from the container opening forces the nitrogen gas out of the widget and into the beer, allowing for the mixing to be done at the time of pour, rather than when canning. These beers are meant to be 'poured hard,' meaning you do not tilt the glass to meet the beer to prevent foaming, and you instead pour parallel to the glass and perpendicular to the table, straight up in the air. Once the container is empty, you can even hear the little canister rattle around in the can or bottle. This is not a gimmick and actually makes a difference in how the beer tastes.

To get serious for half a moment, you may notice a trend in beer technology that boils down to 'how can we get our consumer base to taste our beer less and drink it faster, and therefore more of it?' I think that binge drinking is a toxic impulse in our society and because beer is regulated, they have to be subtler than you might expect to encourge people to drink more of their product. They do this by making 'light' beers, and marketing them as beers you can drink more of, describing them as 'less filling,' rather than a low calorie alternative. They also do this via rifling, punch holes, and vents. They have to stop short of shotgun trap doors as they must tell their consumers to 'enjoy responsibly' but I definitely believe if they could sell you a tube and a funnel to make a beer bong with every 30 rack of Busch Light, they absolutely would. Even the cold activated mountains are to let you know when your beer is so cold that you will barely taste it. They know their product is bad, and they depend on volume sales.

I had quite a few expectations coming into 2020 & unsurprisingly few were met. One of