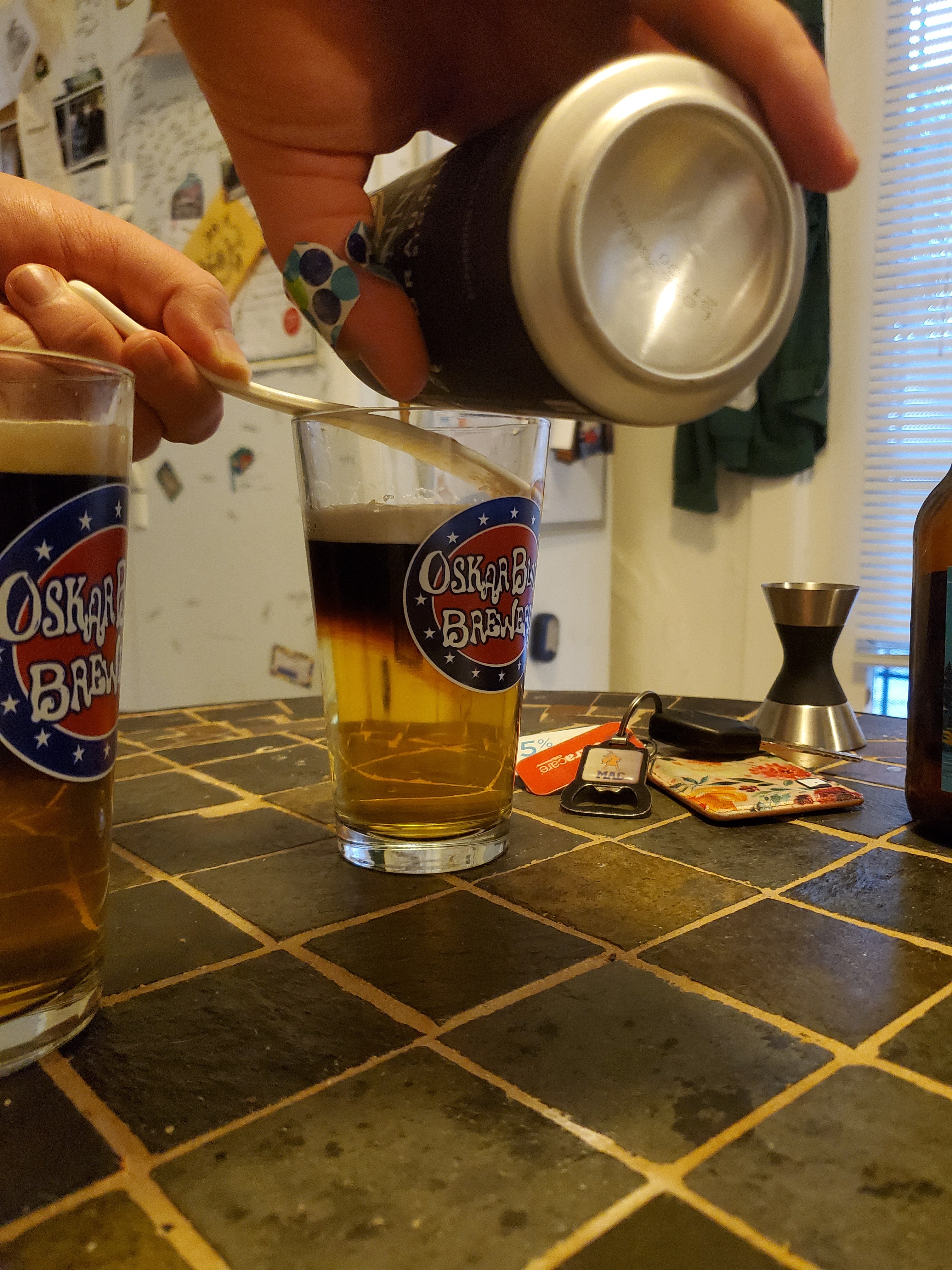 Sometimes I try new things faster than my local grocery store brings in new product, so I decided to do a little DIY thing for trying new things and decided we should make some beer cocktails. My husband Cory and I picked a Saturday night and decided to make some! I tried to pick things that had alchoholic components that we already had in the house. In this case we found things that used Kahlúa & bourbon because we already had those in our bar. I got the rest from the store the day of. I got 1 half gallon of lemonade, 1 6 pack of Sierra Nevada's Summer Fest, 1 small bottle of cold brew espresso, a single tallboy of Blackthorn cider, and 1 4 pack of Guinness tall boy cans.

Snakebites can be made with lots of different kinds of beer & cider combination, but the fundamental formula is the same. A ratio of 1:1 beer to cider. I picked up a pack of the 2019 Sierra Nevada Summer Fest (a czech style pilsner) & a single tall boy of Blackthorn cider (a middle of the road, not too sweet, not too dry cider.) Of the drinks we tried, Cory & I were the most ambivalent about this one. It would be fun to experiement with different kinds of beer & cider combinations. This particular combo did not work very well.
Cory's review:⭐⭐⭐
Jenna's review: ⭐⭐ & 1/2

Now I am not a big coffee or stout person, so I did not expect to like these much at all, but I was pleasantly surprised by how much I liked this! This is a drink you want to start your night with though, because if you're not careful 3am will roll around and you'll wonder why you're still awake and realize that there was coldbrew espresso in this. The Kahlúa adds some sweetness that really brings out a more mocha/chocolately flavor to this. This is one that I've made again for myself since our beer cocktail night.
Recipe:
1 oz cold brew espresso
1 oz Kahlúa
8oz Gunniess or Stout of your choice
Cory's review: ⭐⭐⭐& 1/2
Jenna's review: ⭐⭐⭐⭐

Okay, so I'm the only one that calls them Beagles. These are frequently called half & halfs or black and tans. Unfortunately lots of things are called 'half and half' and though not an association that existed when they were named, but 'black and tan' is now associated with the occupation of Ireland by British military. The origin of the 'black and tan' name however comes from a description of dogs with that color combination in their coat, so I humbly suggest that we call them beagles. 1 because beagles are often times white, tan and black, and 2. because beagles are, I think, the cutest kind of dog. I did not like these very much. It's just like drinking a stout for a while and then you drink a slightly watered down and ale-y stout. We used Gunniess & Summer Fest for these. I don't really like stouts, so I wasn't a fan, but they're very impressive and cool to look at.
Recipe:
Fill half a glass with a pale beer (pale ale, pilsner, pale lager, whatever you like)
Using a wide spoon (we used a rice paddle), very slowly pour the stout over the back of the spoon.
I recommend watching a youtube video on how best to do this! It helps if you pour the ale hard to get a foam head buffer that you can pour the stout ontop of!
Cory's review:⭐⭐⭐& 1/2
Jenna's review: ⭐⭐

For these, we drank my #1 favorite light beer: PBR Easy: as close to water as a beer can leagally be while still being a beer. There are lots of recipes for boilermakers online. Some of them just pair a shot of bourbon with a pale ale/american lager. Some of them mix them into one glass. We decided to go with separately. We went with sipping the bourbon and leisurely drinking the beer to cut the alcohol bite of the whiskey. We were both of the opinion that neither thing is improved by the presence of the other in this case. It's less a cocktail and more a bar special? I happen to not like bourbon very much so this didn't really have a chance with me.
Cory's review: ⭐⭐& 1/2
Jenna's review: ⭐

A classic summer beer cocktail, we made shandys! Very easy & refreshing drinking after a hot day and the lower ABV is a nice way to wind down after trying some much boozier drinks! If you wanted to make radlers instead, just sub lemonade for grapefruit juice! It's an easy thing to keep the ingredients around for at all times, if you like to drink lemonade. I don't like lemonade very much, so this was a hard sell for me, but I knew what I was going to get.
Recipe:
Pick a fairly mild light colored beer! Could be a pale ale, pale lager, summery wheat beer, anything! Use a 1:1 beer to lemonade (or grapefruit juice for a radler) ratio.
Cory's review: ⭐⭐⭐
Jenna's review: ⭐⭐& 1/2

Do you have any beer cocktails you like? We didn't try to do any drop shots, like sake drops or Bailey's drops, both of which I've had before. We didn't do beer backs to bloody marys either. Do you like to mix your beer with cola like the Germans? Let me know what you like on twitter @jennegatron!