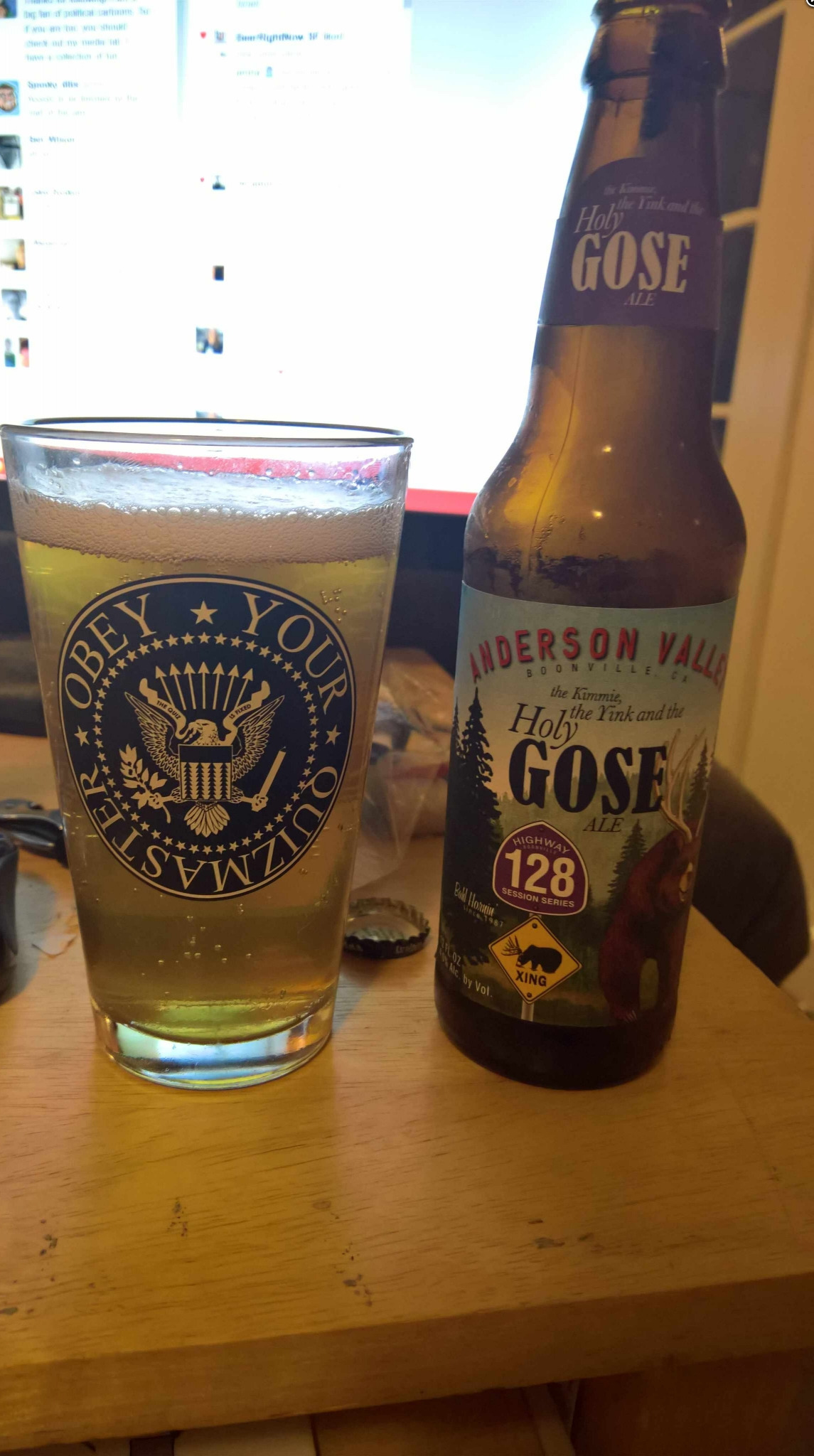 Today's post is about one of my favorite beer series: the Anderson Valley Gose series! Anderson Valley is a craft brewer in Booneville, CA. They are recognizable for their Beer logo: Beer being a bear with deer antlers, bear + deer = beer. It's very cute.

Anderson Valley have a whole line of goses that they rotate through seasonally. This list is currently: the base gose 'The Kimmie The Yink and the Holy Gose,' a blood orange version, Briney Melon, a G&T (and a barrel aged version of the G&T), the Framboise Rose gose (Raspberry + rose) and finally Cherry.

This series of beers is only rivaled by Sudwerk's Funhouse series for my must try new beer lists. (I will write about Funhouse later 😉) This series also gives me a great opportunity to dig in a little more in goses as a style!

We covered sours as a family previously and you may remember or otherwise be familiar with goses as a style of sour. Goses are a German style created in Goslar and popularized in Leipzig. They fell out of fashion in Germany before being revived in the 80s. Since this is German style, you pronounce the 'e' at the end, saying "go-za;" it's said more like the famous home run marathon loser Sammy Sosa and less like 'goes.' They made their jump to the US as a style fun for craft brewers to experiment with before exploding in popularity over the past few years. Goses are characterized by their low alcohol content (Alcohol By Volume), tart taste, pale color and salty flavor.

In ~February 2013, the only place I found 'weird' sour beers was in specialty bottle shops like The Ale Jail in St. Paul Minnesota. This is where I first bought my favorite beer of all time: Berliner Style Weisse from Bayerische Brauerei und Gasthaus. This exact beer happens to be a Berliner Weisse, but they are very similar and have had twin trajectories into popularity. My first gose I checked in was in 2014, and was local brewery Sudwerk's Farmers Market Citrus Gose. I didn't join Untappd until 2014 so I don't have a log extending back older than that, but there was only about a 12 month window between when I was taking beer seriously in 2013 and when I joined Untappd. Judging from my check-in history, goses hit velocity in 2016, continuing at a steady clip even now. When I started checking in 2014, large variety wasn't available for another 2 years.

The Kimmie, The Yink and the Holy Gose (KY&H) is the flagship of the series and the first I tried, and the second gose I ever checked-in in early 2015 It was love at first taste, and it was my favorite American made beer until it was dethroned by its own pink daughter Framboise Rose Gose. The KY&H Gose is I think a properly perfect beer, and an absolutely stellar representative for the style. It is crisp, tart, funk free and endlessly drinkable. It has low ABV, but be careful, it will absolutely annihilate your palate for what you drink after. I value variety in my drinking, but it is one of the only beers that I repeatedly pick up more six packs of when I run out.

Next is the lone non-fruit version of the Anderson Valley gose: the G&T. This beer is meant to mimic a Gin & Tonic, which I can see why a gose would be a good beer match for trying to replicate that flavor. You can get very herby to reproduce the juniper, you can get some bite from the sourness instead of an alcohol hit and it is light enough that you can get some serious tonic water vibes from it. This beer also happens to be not at all my style. It has mostly fallen out of canned distribution in my experience and is now sold in a barrel aged variety in big bombers (22oz bottles). It's definitely different that what other people are doing and I admire the ambition even if the execution didn't work for me. It's no longer listed on Anderson Valley's website and is seemingly out of production.

Finally are all the fruit babies in the gose family. I will talk about these in ascending order of my love of them. First, the most recent addition: Cherry! Cherry beer rarely works for me. It's such a powerful flavor that I find most beers can't stand up to it unless you get something very roasty and dark chocolatey. Unlike the others, I won't be picking it up again. Blood Orange is the next; I very much enjoy a citrus beer. The sours especially can pair nicely with the pucker of citrus fruit. I've seen everywhere from blood orange to key lime to grapefruit with varying levels of success. The blood orange gose is totally respectable, if you see it, it's a totally good beer. There's just stiff competition in the Holy Gose family! Briney Melon is our fruit runner up. This beer is properly amazing. If you took a watermelon warhead and turned that into a beer, this would be that beer. It's got the fruity sweetness of the watermelon, with the powerful citric acid like punch of the tartness. I want to drink this beer basically all the time. I unwaveringly recommend this beer to anyone who wants to try a fruited sour.

Finally the crown jewel of the entire Holy Gose family, my favorite American made beer period: Framboise Rose Gose. This beer is incredible. I am a sucker for beer with berries anyway. My favorite fruits in beer are Passionfruit, Guava, Raspberries & Blackberries. The juicy fruitiness of the raspberries allows for a sweet start, the rose hips give the beer a little depth and the tart finish makes you want to take another drink. It's a masterfully crafted beer. It is coming into season right now, so keep your eyes peeled at your local liquor store's craft beer section. It is a cannot miss for me. (Sorry I have no picture of this one, I had clearly enjoyed a few too many and my only photo is rather out of focus. I promise I'll grab one next time I find one out in the wild 😊)

That's all the Anderson Valley goses! Go pick one up and give it a try! They distribute nationally and even internationally. I saw their beer in Amsterdam, so it's very likely you can find a bar or grocery or liquor store near you that carries them. Do you have a favorite beer series that you make sure to snag the new entry of every time you see it? Is it the 'Enjoy By' from Stone? Maybe you have a local brewer that has a kettle sour series like Sudwerk does! Spring is coming up, and that's prime taproom with outdoor seating weather and a perfect opportunity to try the new stuff that will be rolling out!